Heart surgery - tried to get fixed up, but no luck today!

Stefan Ljungberg
2017-12-22 19:13
In my family, it seems that I am the one who mostly attracts events that requires medical attention. As a boy, I don’t know how many times I had to get stitches in my head after falling and crashing into things. Two eye operations to correct eye sight, appendicitis removed and chipped teeth. Broken collarbone and a thumb as well. And now heart surgery. Thankfully, all has gone well and I have always come out stronger, and my spirit to see how far I can go has not disappeared yet… 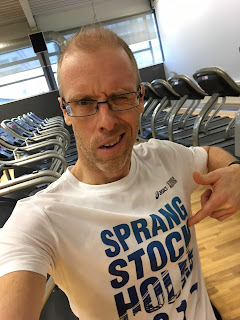 Time to fix the heart! Last run before today's procedure.

Today I spent the day at Karolinska University Hospital to make a catheter ablation of a heart arrhythmia that I have been suffering from during the last three years. Heart arrhythmias are not uncommon, and comes in many different flavors and types – it manifests itself in that the heart beats more often than normal, constantly or for shorter/longer periods of time. Everyone has an extra heart beat every once in a while, and you normally don’t notice it - these are harmless extra beats and doesn’t affect your heart’s performance. Then there are more serious arrhythmias where the heart goes into longer or shorter periods of a faster rhythm, either with the upper or lower chamber beating abnormally fast. These arrhythmias are often caused by the existence of extra nerve endings in the heart that kind of short circuit the normal electrical flow of nerve impulses that regulates the heart rhythm. Serious arrhythmias make the person feel extremely dizzy and can make them faint as the amount of blood circulating in the body becomes less as the heart’s pumping efficiency goes down drastically. The heart is fluttering without managing to get enough blood out in the system. If you have these arrhythmias you might have to go in to the emergency and get an electric shock to the heart to reset it to normal behavior. Fortunately, I have not been suffering from this kind of serious arrhythmia, mine have been of a more benign type (Supra Ventricular Tachycardia I believe), that basically has given me extra “normal” heart beats, without the heart going into a fluttering mode, and thus not making me overly nauseous nor requiring any trips to the ER. It has so far only appeared when I train and exercise – but that has been quiet often lately!!! 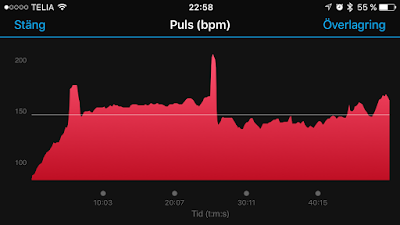 Early signs of something unusual in 2015 - spikes of my heart rate when training
So how did this start? Well, I started training more consistently four years ago with a pulse meter to monitor and set my training zones correctly. Every once in a while as I analyzed my training, I noticed that I had a few spikes in my heart rate, when it went from a normal rate of 150-165 bpm, up to 185-200 bpm. As the “extra” pulse was consistent with about +30 bpm, I figured it was something wrong with the watch, and I didn’t feel anything strange during my training. But the problem continued to appear, and one time when this happened I could actually feel/hear the very high pulse inside my body. It was indeed not a watch error, it was a heart error! I contacted my cousin who is a heart specialist, and he suggested I contact a clinic to get this checked. I did indeed do that, and got to check my heart as well as take a long ECG over a three day period to see if we could record the arrhythmia. However, during these three days nothing happened, and the case was closed. Doctor’s word: as long as I feel OK, there should be no problem. 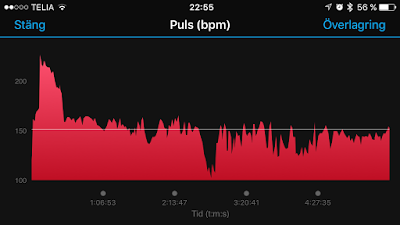 Vasaloppet 2016 - a tough and intensive start with heart rate topping of at around 225 - the highest I have ever seen it in action! Yes, I was tired on the top and thankfully it calmed down quickly on its own
The periods with extra beats disappeared for a while, but then started to come back. When I got my “attacks” during training I could often choose between stopping and let my heart calm down before continuing (it could take anything from 10 seconds to a few minutes), or just carry on and "ignore" the extra beats. The extra pulse didn’t really affect me that much, although I knew that if it continued for longer periods of time when exercising (30+ minutes) I often got a little bit more tired afterwards as the efficiency of the blood circulation was not 100%. I requested to open my case again, but unfortunately again nothing was captured. The heart specialist reconfirmed the previous doctor’s advice: as long as I felt OK, there was no problem. If I started to get the issues again, I was more than welcome to come back and revisit the case.
So beginning of 2017 I had a calm period as far as heart arrhythmias, I could train very hard and felt very strong.  But spring time it started coming back again. I ran the Stockholm Marathon with an elevated pulse during the last hour – I was very tired afterwards, but never felt any pain or dizziness. 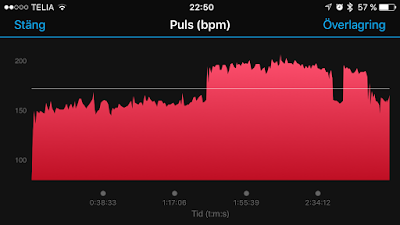 Stockholm Marathon 2017 - started out fine, but  for most of the 2nd half of the race I had an increased heart rate. Felt OK, but legs were killing me the last 10k... With a normal heart rate, maybe I can go faster for longer?
Later during the summer of 2017 I started also to notice a change in the feeling when exercising. The high pulse came more often, and more and more I started to feel a sense of tiring, and actually stopped quite a few training sessions as I got uncomfortable with the situation. It made me more concerned, and as I really wanted to get stronger, I decided in August to open up my case again for a third time. As I was waiting for a deeper analysis I finished of the competition season, trying to have in mind not to go over the top and to stop if I ever felt dizzy or ill. You who know me, know that I never stopped... 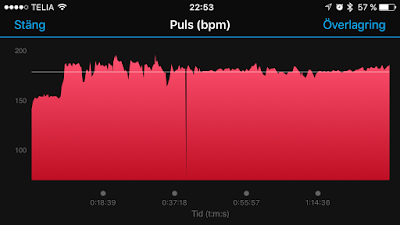 IM 70.3 Ruegen run - 20km at race pace with an increased heart rate - focused on always evaluating how I felt as I didn't want to take any chances. I was OK during the run, but very tired afterwards and the day after... I really wanted this fixed now!
Time went by, and after many calls to the heart center I got them to arrange a running test on a treadmill. Equipped with ECG sensors, with one through my nose down my throat close to the heart, I set off running. My main worry was same as before, that nothing would show up on the sensors. But after only 10 minutes of running I got my heart started, quickly going up to 205 bpm… Doctors were happy getting the data and would analyze – the question was if they had enough data to evaluate if surgery was an option. A week went by, doctor called and informed me that yes, the arrhythmia seemed to be of a type suitable for surgery through catheter ablation, so I would get an appointment. And here I am four weeks later, at home after undergoing my surgery today! 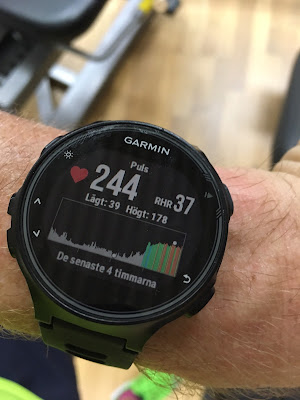 This is actually a reading error on the watch...but I hope I will never see it show over 200 again!!!
The procedure is complex, but simple. A catheter is entered into the heart through a vein that is accessed via the groin. First an electric mapping is done of the heart to check the exact type of arrhythmia and its location. This is done by sending electric pulses triggering the arrhythmia and pinpointing the source of the loop. Then if successfull, either radio waves (heating) or freezing is done on these areas of the heart area to break the electric loop/short circuit that is causing the extra heart beats. Advanced real time x-raying and analysis is used to make the procedure, which took approximately two hours once the incision was made and they started the procedure. I was awake all of the time with a mild sedation in order to be relaxed as they did their stuff. Kind of scary to know that they were moving around inside your heart! As I lay on the surgery bench it was an ierie feeling, sensing the heart beat going up and down as the doctors triggered my heart in different ways. They pushed me up to 185+ bpm a few times, and as I lay still I could really feel the heart pounding hard. With the same pulse when exercising you are moving around, catching your breath and focused on other things, here it was just a heavy heart beat rushing on. Yikes! 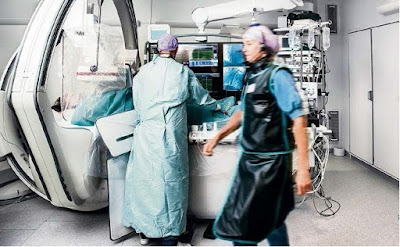 Complex machinery and competent people in action!
Unfortunately, the surgery today was not entirely successfull. Despite one hour of triggering, insertion of stress hormones to increase my pulse and addition of atropine to really push my system, they could not trigger my arrhythmia. At least they have now excluded some potential sources, but another round of analysis has to be done in order to get better test results indicating possible source. Also I was reassured again that my arryhthmia is not dangerous, as long as I feel OK I can continue as before when it comes to training. I was also extremely happy to hear the cardiologist encourage me to continue the analysis and get it fixed. As I only get this while exercising I have at times felt that this was a luxury problem not worth fixing. After all, if I stop training so hard I would not get my attacks. But he felt that this was worth pursuing, so I will do so. 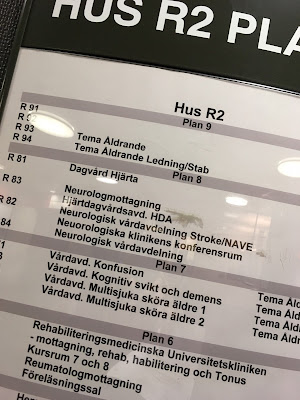 R81 - that's my place today!
After the procedure I got to rest for a few hours while they monitored me, and then I walked out and took the train home. I arrived to the hospital around 10am in the morning, and by 6pm I was home again. Now I have to rest for a few days (rest = no training…) while the incision in the groin heals, but in about a week’s time I hope to restart training again. 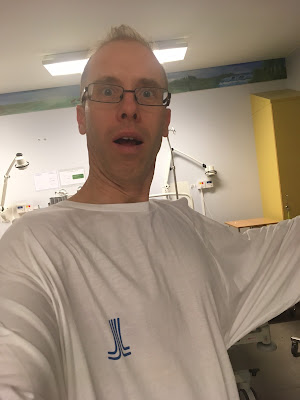 You get free clothes at the hospital in Sweden. Me like!

So what is the next step? Well, I will push for a further round of analysis, and if things goes well I might be up for another ablation during spring/summer. I will continue as planned for Boston Marathon, but most likely re-evaluate the rest of the competition season if another procedure will be an option for me. It will all depend on how quickly I can get an analysis done and referal to the hospital. My first round took five months in total.

As I was attended at the hospital, more than anything I felt immense gratitude despite the deep dissapointment that I could not get fixed. Gratitude for the excellent health system we have in Sweden, where I only pay 40 USD for a heart surgery (sure, on top of high taxes...). Thankfullness towards the fantastic team at the hospital who treated me so well and took care of any signs of nervousness from my side. Gratitude for a supportive cardiologist allowing me to continue pursuing my dreams around endurance sports. Gratitude to be so fortunate, that despite a heart arrhythmia I am still strong and healthy.
Heart arrhythmia and surgery – sounds scary. But the only thing I have thought about the last three years has been – if I fix this, how much stronger will I be then? I guess I will have to wait another six months to maybe find that out...

Merry Christmas and Happy New Year to all of you! Life is good!
Öpnna i nytt fönster